Intention; a powerful word. In my meditations now, I set the intention. The vision of mass healing is strong. Join with me in the world of imagination. Place flowers in the barrels of guns. Envision and dream. Imagine and it will be!
Posted by ValarieJames.com at 11:17 PM 1 comment:

Neighbors say it was the worst storm south of Tucson in seven years. The wash that runs through my property flooded right up into the yard, tore down the front chain link fence and upended all the concrete fence posts. My studio and the Santuario building flooded from the bottom up and all the skylights popped their seals.

Beautiful trees in the front yard are almost completely denuded, the leaves literally scissored in small pieces by quarter size hail that came down solid for a full half hour. The wind was gale force and we thought for sure that the windows would break. The worst thing was the birds. Birds spilled out of the air dazed and I found them dead on the front yard.

The next morning after the storm all the neighbors were out shoveling mud. One of the neighbors remarked that he couldn't imagine how migrants traveling through open desert could have made it through the hail that had pitted his open garage flooring. Another neighbor said he had actually seen 3 separate groups of migrants emerge from the washes that morning. What matter of hell had they endured?! How could they have survived such a storm?

We have had violent thunderstorms every night since and now my dirt road is impassable without four wheel drive and a lot of moxie. Each time it storms, the wash runs again. After the last good rain, when all was quiet and lightning flashed in the West, I sat by the wash in the dark and listened to the voice of the water. What had always been a dry arroyo was suddenly a spectacular river running through the property, 20 ft. across in some spots. The air tasted sweet on my tongue and I let the rippling sound of the water wash over my being for the longest time. Water, always such a miracle in the desert, transmutes from a murderous torrent to the sound of angels in no time at all.
Posted by ValarieJames.com at 10:46 PM No comments:

A Letter from the Artist 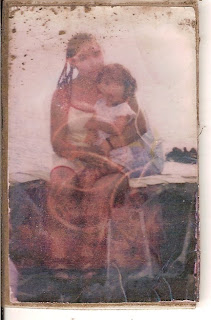 found in the Desert.

It is hot and I am haunted. The constant news reports of people dying in the desert makes me feel crazy. In the first week of last month, just down the road, a mother died in her son’s arms from dehydration. And then another mother of two, Lucresia Dominquez Luna, a woman who reportedly brought joy to everyone she ever met in life, walked 37 miles before collapsing in the June heat, her scattered remains found over a month later by her grandfather after he had searched the desert for weeks. Who besides their families will remember these women’s deaths and how many other men, women and children will perish in the desert, never to be found at all?

For years now when I walk my dogs at the end of each day, I have met people attempting to migrate through the desert. By the time they reach my place on the edge of an old cattle ranch, they have walked for days, 35-40 miles from the border. Most are on the verge of collapse, completely out of food and water, dull with exhaustion, and hobbling with blisters. The fact that they still have hope in their hearts never ceases to amaze and humble me.

And they are scared to the bone, much more frightened of me and my dogs than I could ever be of them. The dogs smell their fear on the wind. With great smarts and loving instinct, the dogs tread softly and approach each person with informed trust, tails wagging.

It is mostly men I find, young and old, traveling in small groups though I have also met men who are alone, abandoned and lost. In all this time, I have NEVER felt unsafe or met anyone who displays criminal intent, in fact, I am treated with a rare old world kindness and civility that I return with serious respect. I have met fathers, sons and husbands. Lately, I’ve been meeting more women – sisters, mother and daughters.

As an artist, the work I create in response to this crisis in our desert has managed to remain above the political fray by focusing on the underlying truths of immigration; matters of the heart and family and the grace we all share. But of late, I am growing weary of our increasingly militarized response to the most marginalized among us. I remain shocked by governments on both sides of the border that ignore obvious economic root causes as they draft policies that undermine the ability of families to survive. I shake my head in confusion at the draconian erection of giant walls that split the people, the desert environment and the wild creatures that roam it. And I worry about the creeping erosion of all of our civil rights as our government installs more high tech big brother gear near the border and elsewhere throughout the country.

Crime, usually Mexican on Mexican and drug related happens in the dark of night and stories of migrants being robbed by banditos are not uncommon. Rare if any are reports of migrants attacking U.S. citizens. They have too much to lose. Sadly, desperate people can do desperate things sooner or later and fear mongers in our midst will feel even more justified in their outdated us vs. them world view. We attract what we fear the most.

I don’t know about you, but the only way I can get through this dark season is to try like hell to stay in my loving heart, continue to make art that remembers the people and the land, and pray…pray without ceasing that we will all come to our senses sooner rather than later.

In the past month, many women have been found dead in the desert south of Tucson. In addition to an 18 yr. old from Guatemala, a 17 yr. old girl’s body was recovered, two unidentified women were found (ages unknown) from Veracruz, MX and Puebla, MX., a 26 y. old from Tlaxcala, MX, a 37 yr. old from Michoacan, MX, and finally, a 33 yr. old mother from Queretaro, MX., was found next to her (still alive) 10 yr. old son. One wonders if this mother and her son were trying to join the rest of their family in the U.S. before the gates slam shut forever.

They are but a few of the thousands of people whose bodies have been recovered over the years. Many will never be found. This hurts me. It hurts my neighbors. It is an ache in the marrow of the collective soul. When and how we heal this wound in the fabric of our society may be the ultimate measure of who we are as a people.

So, it is 2007 now, and I ask again. How many men, women and children will continue to die in an attempt to feed, house, and educate their families…and who besides their broken families will remember who they were in life…their laughter, their fears, their hopes and their dreams?
Posted by ValarieJames.com at 9:33 AM 1 comment: